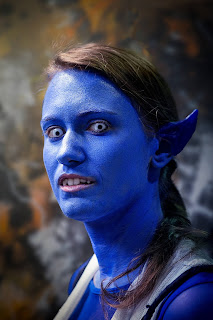 I attended LFCC first time this year as after attending several MCMs at London Excel I felt a need for change. This time I wanted to do another Legacy of Kain cosplay and felt like it is time for me to portray an ancient vampire. I got inspiration for my fellow friend Lucinvampire and her Janos costume. My attempt was not at any ancient in particular, but you can spot the resemblence to Janos´s outfit. It took me quite a while to figure out the details, especially the wings.

I ended up cannibalizing some parts of my previous costumes (practice which is not unknown to most cosplayers). Luckily, none of those pieces were damaged and I can freely use them between costumes (like boots or ears). My golden boots got another spray paint layer and also I have made new thicker leather guards for them so they would not bend as easily. This time, I glued my ears with spirit gum, so did not have to worry about losing them.
Since last year I have done Raziel´s bat wings, I felt like trying feather wings for a change. Getting feathers was the easy part, how to attach them securely to the construction was another. I wanted them to be posable as well, so I have used alluminum wire with cloth for the main body, like I have done for the bat wings. I have attached all the feathers in small horizontal rows using velcro strips (hook and loop) and in the end, I ended up stapling them all on. The glue from the velcro was not strong enough to hold securely (at one point, all of it peeled off), so the stapler worked really well. For the main body I have used black leggings (I had wet look tight trousers ready but it was just too hot that day), white robe and blue see through blouse. For my face I wore my white eye contact lenses (those are actual prescription ones) and painted my face blue. For my hands I used painted witch fingers to create a tri-claw effect. Painting my hands was the worst decision, unfortunately, as I could not touch anything at all, which was super frustrating and I wish I would have gone for gloves instead (that is already on the list of improvements). The wings, which were the part I worried about most, were the sturdiest piece of my costume in the end. None of the feather layers fell off and even when I was walking, they were joyfully bobbing up and down with me. 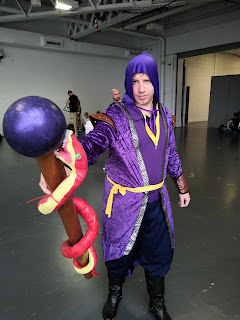 Baziel finally did his long awaited Moebius costume. He did the snake staff with the ball all on his own (I painted the snake red and yellow). I was really worried it would not hold but with a bit of glue gun and screws it all held together really nicely! Moebius´s costume is actually quite complex, but I feel we improvised well and I got to use my lame sewing skills to create a v-shape in the back of the tail and attached shoulder pads (originally from an executioner costume).

As to the convention itself, it was cheaper than MCM by a bit and I wanted to see what a Friday felt like there for comparison. After we got off the train we went the wrong way at first for few minutes, there were no signs for regular visitors so we ended up going all the way around the venue just to get in. We waited in the queue for about 10 mins and then got in without issues. Maybe it was due to Friday being quieter than the rest of the weekend but I was a bit underwhelmed by the stuff inside. There were plenty of opportunities to shop for merchandise but it felt a bit lackluster, especially when compared to MCM. These were just two interconnected halls with not much going on that day. There was practically no seating throughout the whole venue (if you do not count the panels) and while there was a blue mat in the middle to sit down on, for people in costumes it was impractical to sit down completely. I think better solution was to provide any soft stuff to sit on or even bean bag chairs, as MCM has done in the past. I was not interested in the panels, so after about 2,5 hours of constant walking, we got exhausted (it was 30 degrees outside that day) really quickly. The airconditioning did not work too well in the main halls. 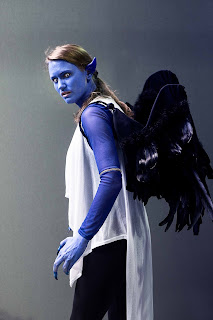 Within the first ten minutes we got first photo opp and while we spent only like two or three hours there total, we got several people stopping us and taking pictures which always makes me super happy. I even got a professional photographer take pictures of me. The result was pretty stunning compared to the pictures taking by me on my phone. He is pleasure to pose for and definitely give him a follow @Colin Eastaugh.

Overall, it was a good experience, even though we left earlier than I´ve thought. Met my awesome friends again which made everything worth it. Next time, however, I will be at MCM London this October, sporting some new cosplays on Friday and Saturday. Be sure to stop by and say hello! I will reveal what I am cosplaying later on.
Zverejnil Raina Audron o 20:44 2 comments:

here are two interesting videos for you to look at. First one is an interview my SoulRev coleague, Francesco, talking about game development and also shining some light about our project. We are still kicking even though things not always go as fast as we would wish. Second one is the well known Hylden aka Patrick Johnson who just joined Patreon and it showcases first video footage of Soul Revenant as well. You can now support his artwork or even request to make models for you.