Since the Undercity is done now, I have started working on the Smokestack area and overhead mountain paths leading to it. Follow me on facebook, where I post updates frequently. Here are the latest screenshots I took from the Smokestack/mountain area:

Also, I got an idea to have a little easter egg in the game. Since we never got to play as Lt. Raziel in Soul Reaver, I have decided to put him in my remake as an unlockable skin.

I have finally got my hands on the old US PSM issue no.19, which houses the most interesting preview and strategy guide for the cut content of Soul Reaver! All credit goes to Whitney from Silent Hill site, who kindly uploaded the pages regarding Soul Reaver and thanks to Kevin who contacted her.
Download US PSM issue no.19 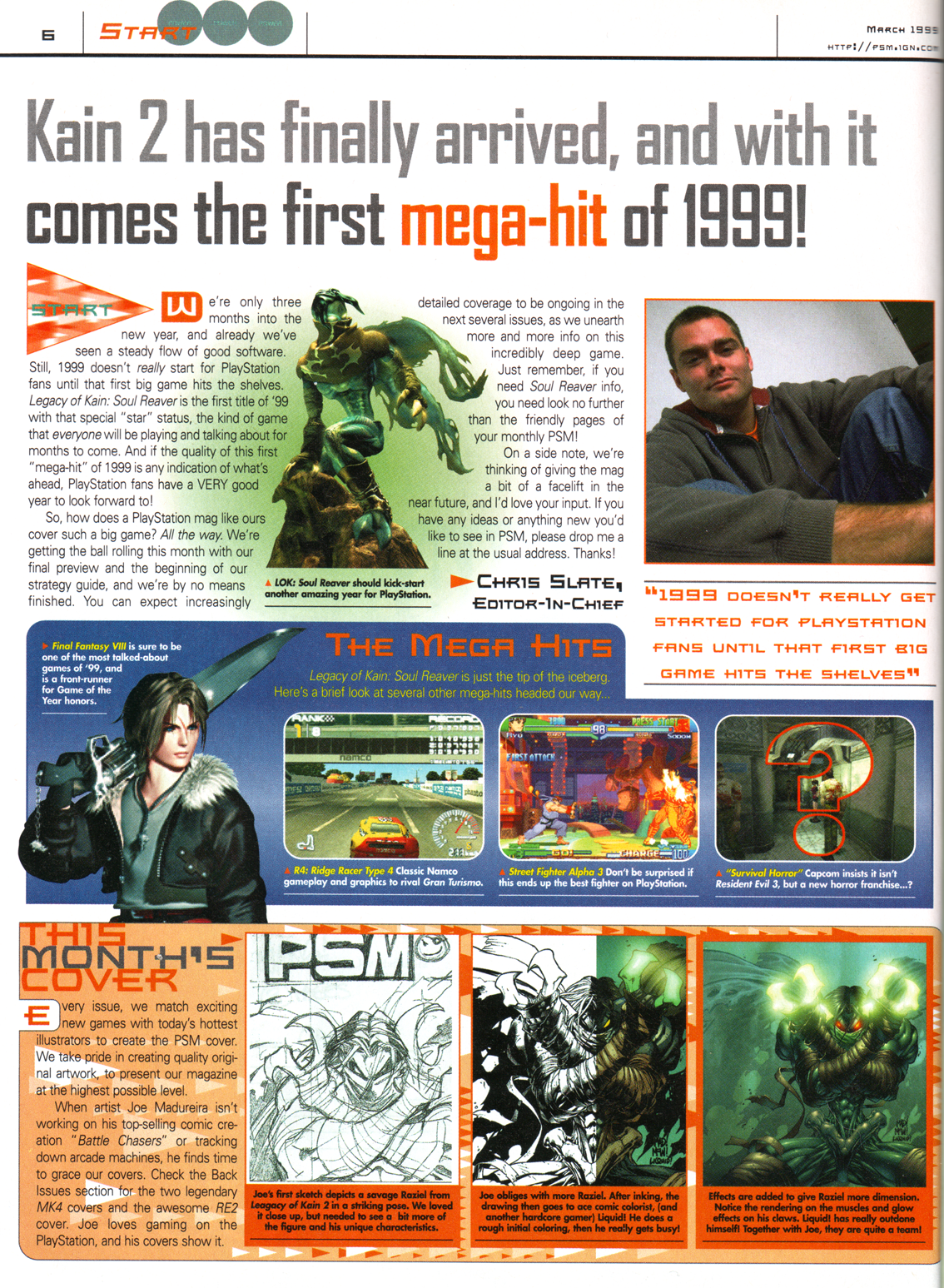 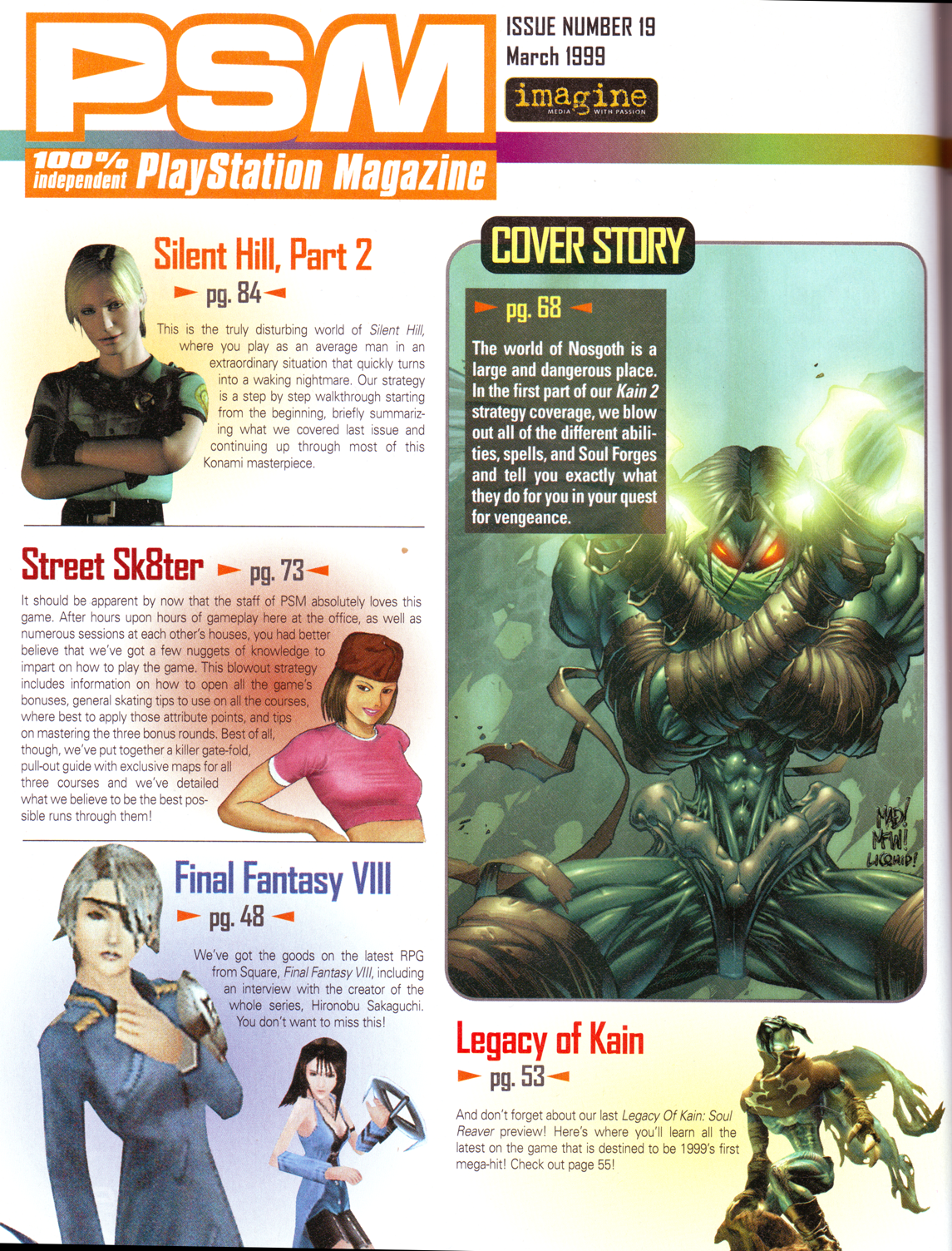 This page has rare shots of an early Soul Reaver, when Raziel held it like a sword. Also notice the caption under Turelim vampire (Dark Demons part) saying: "This Aluka boss grants Kain the ability to breathe underwater." which has every single word in it wrong! The page also mentions that Raziel mission is to exterminate all the vampires in Nosgoth and that humans would give you tips. 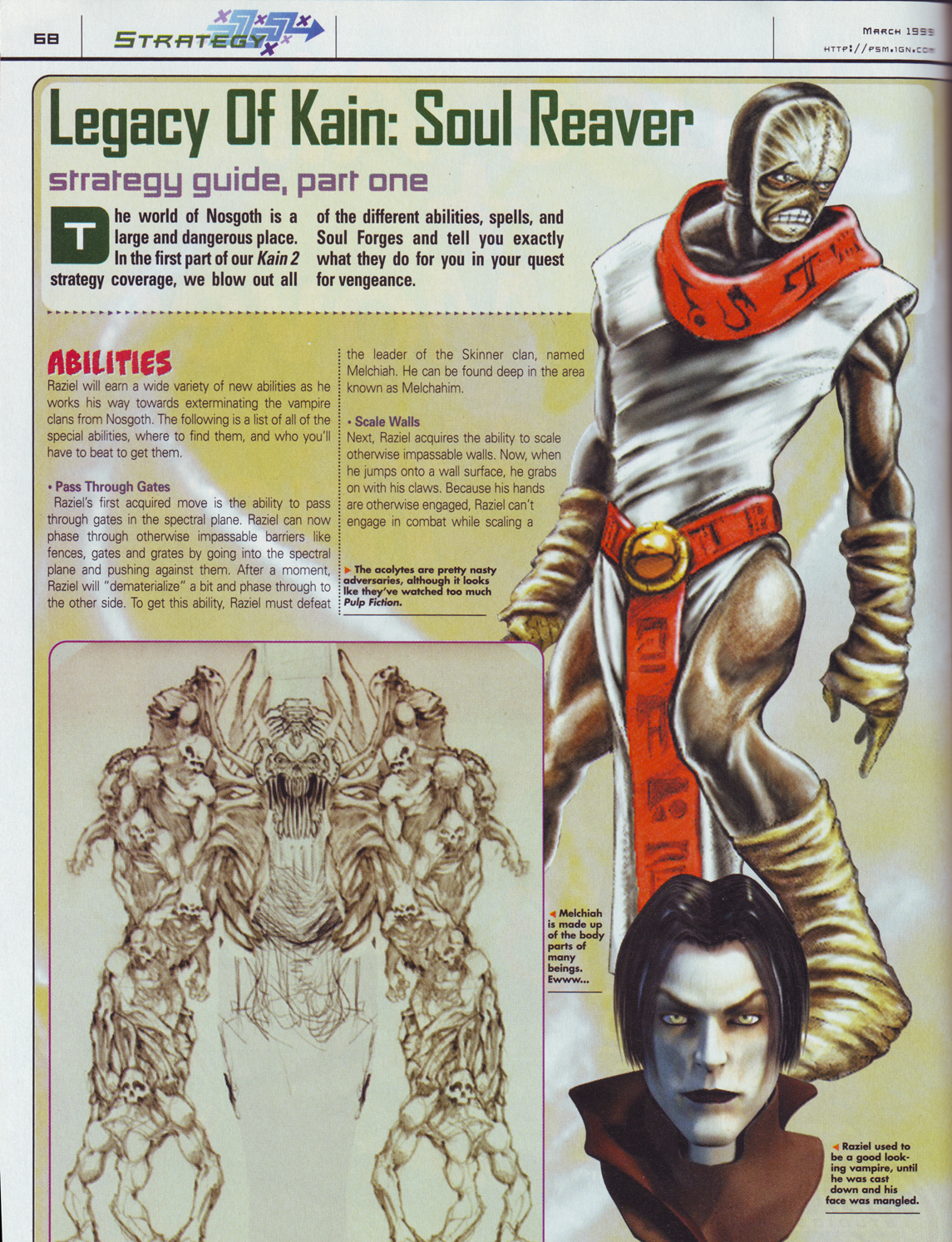 From this page, they included a strategy guide (Guide for an unreleased game? This is rather unusual and premature). Adepts are called "acolytes" in their description and mentions the Melchahim as "Skinner clan", while refering to Necropolis as area called "Melchahim" instead. 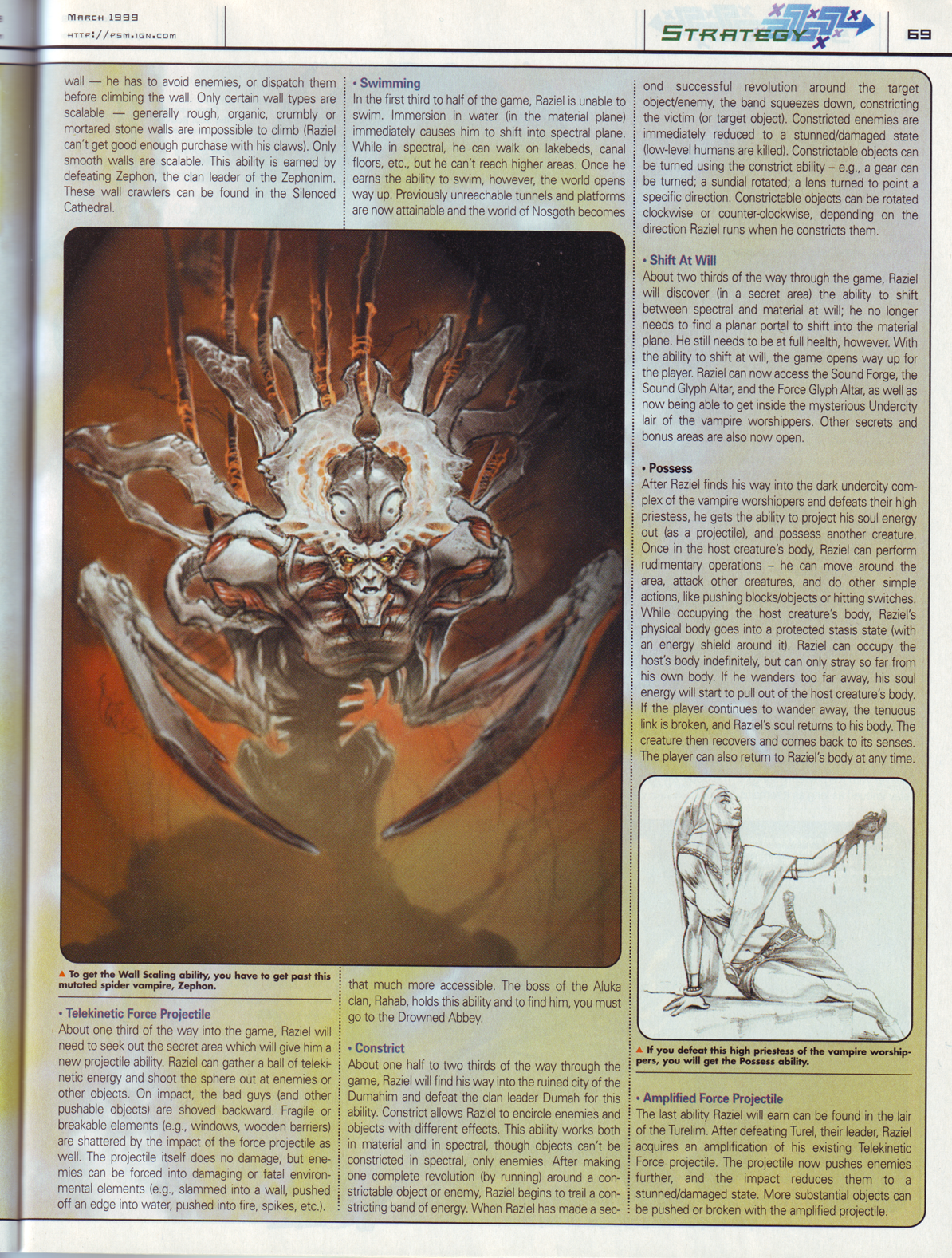 On this page, Rahabim are called "the Aluka clan" and also mentions two cut abilities - Shift at Will and possession. Shift at Will will be gained after 2/3 of the game and that Raziel can now access Sound Forge, Sound Glyph,  Force Glyph and Undercity. It also describes how would possession ability work in great detail. 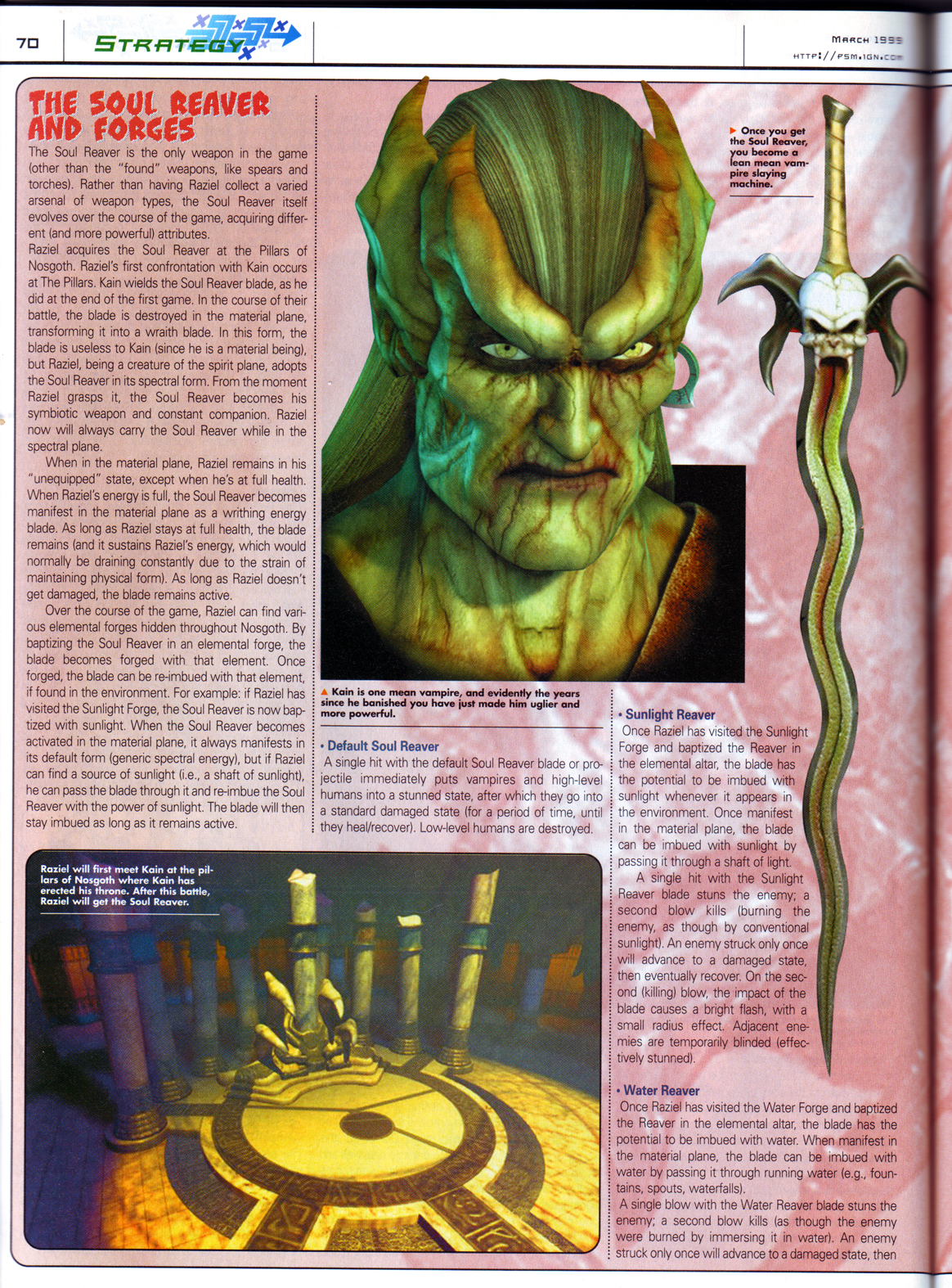 This page describes each Soul Reaver enhancement in great detail, however, it does not state where exactly each forge is located. 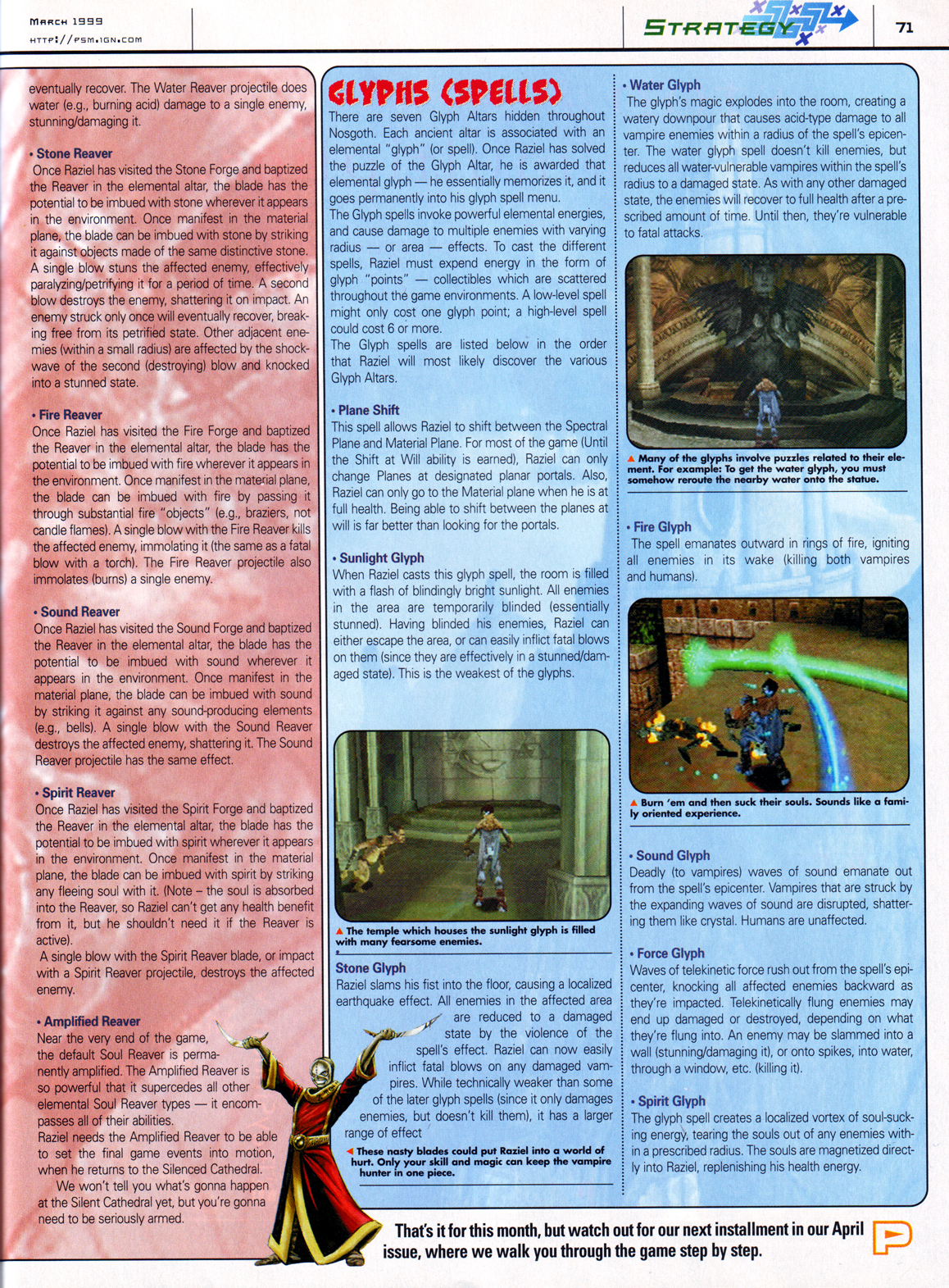 This page deals with Glyphs. Strangely, it describes the Sunlight Glyph being the weakest (only stunning enemies instead of burning them) and Force Glyph is put as pre-last (while it doesn´t kill enemies like Sound and Fire Glyph do).


My fellow SR1 researchers Kevin Chatmajo and Aevum have found interesting collections of old images from many gaming sites. Some of them are previously unseen images of alpha and beta versions of the game. 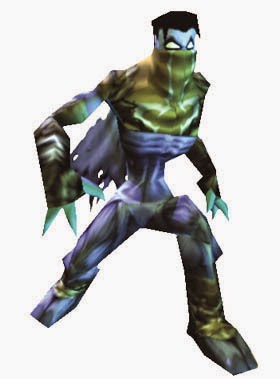 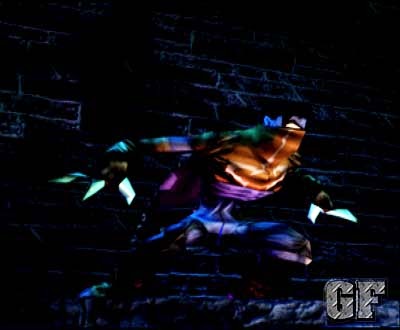 Also, check another version of Sanctus Christus SR1 video (in French) which has tons of unseen footage:

The Undercity and the Priestess

In the last two weeks I was focusing on redoing all of the Undercity and incorporating it into the world of SR. I have used several bits of the existing City architecture and used some of them to built the new Undercity part. I have also applied the released Undercity textures on the new levels to create an authentic feel. I won´t spoil where the entrance to the Undercity is as you have to find it yourself, but I hope you will find the additional area exciting to explore and solve the new puzzles.

Also, here is the Priestess as she will appear in the game:

Compare with original Priestess sketch (recoloured by me):