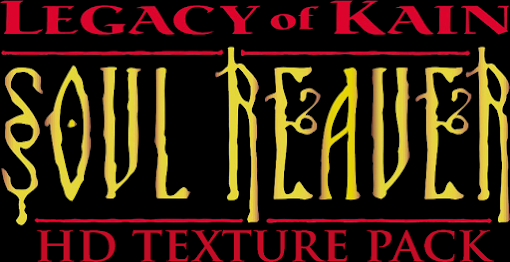 DISCLAIMER: This is an outdated version, get the remastered textures here instead
Soul Reaver has just celebrated its 21st birthday and, unfortunately, it went largely unnoticed. I was so busy working on this project non-stop that even I am guilty of skipping it.. However, if any game deserves a remaster or a remake it would be Blood Omen (Witcher style anyone?) and Soul Reaver. The current technology enables us to go into such detail unimaginable back in 1999. Back then, Lara was just maturing from spiky polygon stage into a more rounded experience and Raziel with his tattered wings has just been released into our living rooms on 16th of August, over half a year after its planned release date. Today, I can finally announce why I went silent for almost two weeks.
I must admit, when I've recently seen a couple of LOK fans redoing textures for Dreamcast, it peaked my interest immediately. Dreamcast version has higher polygon versions of Raziel Kain and enemies but its textures are more pixelated than PC or even Playstation in some cases. In addition to that, the new Raziel's and Kain's faces were not something I was a fan of either. However, it offered 60fps and a dynamic soundtrack, something which the former is missing on Playstation and latter on PC, so either way, the game is rigged... Until now. I have previously used Nulldc and Redream but when discovering that Flycast offers the option to dump and load custom textures, I did not hesitate to make my own texture pack (comparison gallery found on the bottom). 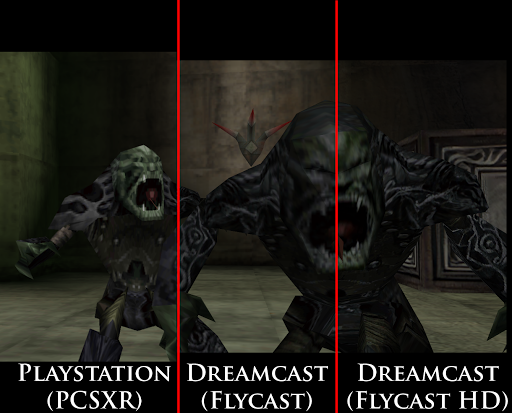 When I started working on this 2 weeks ago, I did not fully anticipate the amount of work needed at first (I poured around 200h into this projec). Within a few days of solidly working from morning till late night with a lunch break in between, it soon became apparent this will be no small feat. My wrist gave out on the fourth day and I could not use my right hand anymore. Determined to keep going, I switched to my left hand and while a bit slower, I kept working continuously. After consulting one of my friends, I ordered a vertical mouse and could not wait for it to arrive (it worked wonders). 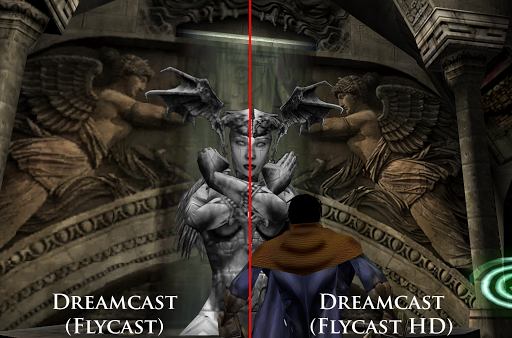 One of the biggest time consuming things I had to do first was categorising all the textures (which area do they belong to as there are many similar looking rock textures). I had to do this twice as I was replacing Dreamcast textures with those extracted and AI upscaled from the PC version (kindly provided by Allard) and hope I categorised them both into the same folder. Their file names also did not match which meant painstakingly trying to find matching texture one by one. On top of the that, Dreamcast textures are all upside down and also some of them have completely different tile sets than the PC version to complicate matters further. Now I understood why nobody has attempted this before... 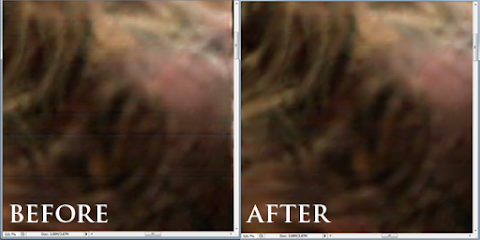 The AI upscaling is an amazing piece of technology. It has been used many times and successfully for video games and videos alike. Resident Evil Seamless HD project is something I have tried recently. Playing RE2 and RE3 in this manner was really refreshing and great to see the glory restored to those original pre-rendered backgrounds which, honestly, aged terribly. The texture tile sets extracted from PC version of SR1 and then upscaled in Topaz, however, while producing good results, also had a downside to it - the process sometimes left blue horizontal lines on certain textures which I found quite distracting while playing so I had to smooth them out by hand in Photoshop afterwards (size 7 brush was my saviour). Unfortunately, this distortion was found on many murals and countless rock textures so this task was quite repetitive and required a steady hand. Another challenge I had to overcome was the upside down orientation of the Dreamcast textures and basically playing matching pairs with them in the folders. Silenced Cathedral has the most tile sets as anticipated (155 total) and below is an example of what it looked like when I had to find two identical sets from PC and DC:

If the only thing I had to do is to flip over the textures and paste them on top of each other, it could have ended there... What further added to the difficulty was that some of the objects like any new models and parts of areas have been retextured for the DC version which made finding exact matching pair impossible and I had to find the missing textures inside others. This often resulted into comparing the light or dark scratches or indentations in a desperate bid to find the exact one (I called it fifty shades of rock textures) otherwise the tiles would not match in the game afterwards. To help me look, I had to imagine shapes or even figures on these tiles (pareidolia was really useful here). However, in certain cases the texture size did not match either so I had to resize them as well. 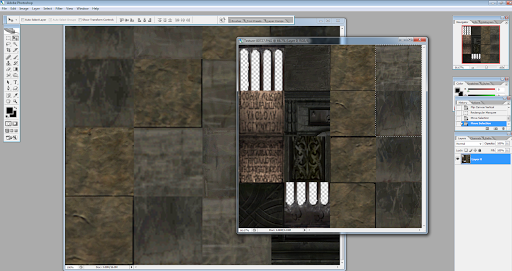 The very first re-texture I have done was Raziel. I had a vision on how I wanted him to look like in my head already. I was always a fan of SR2 textures made by Daniel Cabuco but trying to apply them to the lower polygon count of SR1 Dreamcast Raziel was a headache. I have decided the best course of action was to combine the high res PC textures by Arnold Ayala with Daniel's high res textures from SR2. I think that this mixture fits the the rest of the game well and adheres to the overall art style. 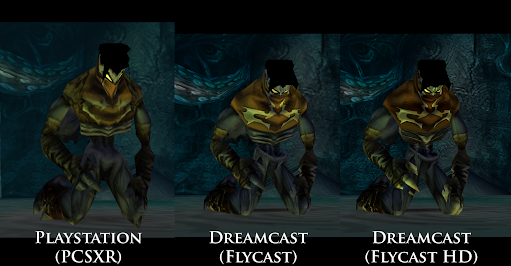 Raziel was originally meant to crack open his shoulder pad and use it to hold his cowl in place. However, this proved too much to animate for the intro and while this idea has been dropped, the expanded shoulder pad was still part of the original Raziel sketches which were used for the textures on PS1, PC and even Dreamcast. I have decided to completely paint the cowl from scratch, added a slightly thinner Razielim symbol and made the cowl more brown to match the intro. I did consider a version with a shoulder pad as well, but could not make it fit properly on the model. Another thing which I always wanted to fix were Raziel's claws. One of the earliest renders has them as white but ever since then, every in-game model had them in his body colour (they didn't fix this until Defiance), while according to the intro FMV and sketches they were supposed to be white/grey. The new textures reflect this now accurately. 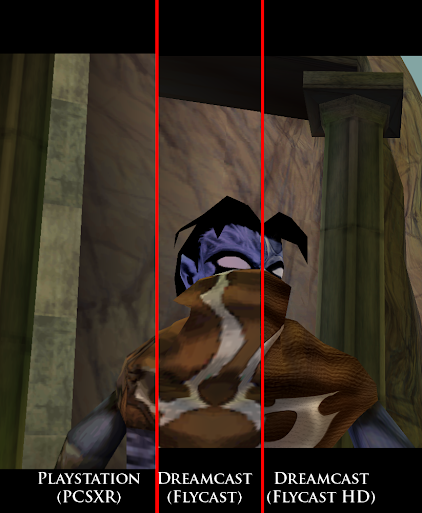 His facial textures and eyes were another thing I never really liked so I have tried to fix them as much as possible. It is not ideal due to the limited polygons on his head, however, this layout I have found works and looks the most natural on this model. One last thing which I have also changed is I added grooves on the bottom of his feet. None of the games have them for some reason but they are seen in SR1 FMV intro. Overall, I am pretty happy with the way Raziel has turned out but am curious to see what other fans can come up with (there is already one with the Hylden's textures applied). Ben Lincoln already tried to apply Water Glyph statue textures and others to Raziel with success. 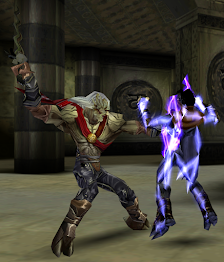 While I knew which direction I wanted to take with Raziel from the start, Kain was a different story. Bringing him closer to his SR1/SR2 intro self proved to be almost impossible due to lack of any good shots of his body, so I had to resort on using the frontal body sketch by Daniel Cabuco which was used for PS1 version, minus the head, as that one was re-skinned completely, so I had to use the original Dreamcast skin. I have at least added new eyes, nose, cheeks and mouth from a high res render of him.

The Soul Reaver sword I always felt needed a make over and while the developers were severely limited by the polygon count, I have somehow managed to apply the SR2 texture to it in the end. I always felt it looked more like its BO1 counterpart, while the intro had the awesome new design. The way the texture is applied to its model is by no means perfect and is even used for its brief spectral appearance which looks strange, but I think it worked out in the end. The rest of the enemies and characters were more straightforward and some of the bosses even uses HD skins released by the devs themselves (Melchiah and Zephon). 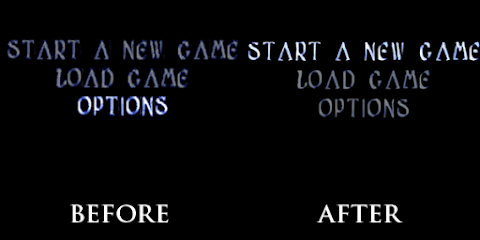 Another thing needing improvements was the font. For some reason the Dreamcast default one shows up really badly in the emulator, so thanks to AesirHod, this font has now been fixed up and letters no longer bleed over each other. Also, the in-game buttons and arrows did not look best even upscaled, so I have drawn brand new ones. The only thing which I could not touch is the particle effects - any attempt at upscaling them or just using higher resolution texture for them would result in various screen artefacts (square ripples, square fire, corrupted looking glyph symbols, etc.). 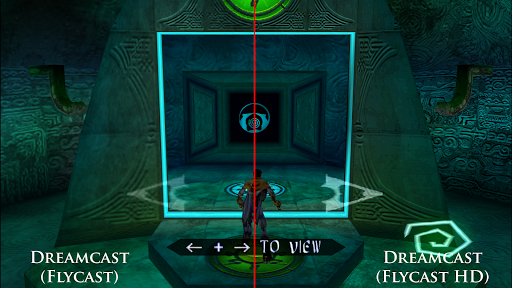 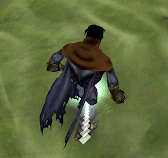 There are also a few alpha textures applied on some objects and some minor adjustments present in this pack. Originally, I wanted to include a lot more alpha textures but the way the objects have been re-textured made it impossible to apply them (especially the Oracle's cave side doors, they now use 4 repeating textures to save memory). Long time ago I also asked Convalise if I could use his high res warp gate symbols for Soul Revenant, while that is on currently hiatus, some of his symbols have been reused in this texture pack (Abyss, Sarafan Tomb, Chronoplast, Stone and Sunlight Glyph).

In the end, I got so absorbed into this project that I had to turn off any distractions, steam, discord, even my browser. If I wanted this to be done fast, the only prospect was to keep on working. I am glad that it is done now and any future updates won't be nowhere near as hard to implement as the initial organising and tile cutting. When I have replayed PS1 version to get comparison shots for this article, I had a small shock from how pixelated the whole game looks now to me. I got so used to the new visuals that forgot what it was like to work with 2MB of RAM (1MB of VRAM) which is absolutely insane and to this day I have no idea how the developers made it work together with a seamless shifting world. Soul Reaver will always be that special game for me which I just can't ever forget. I hope Soul Reaver fans out there will find this texture pack to be enjoyable addition. 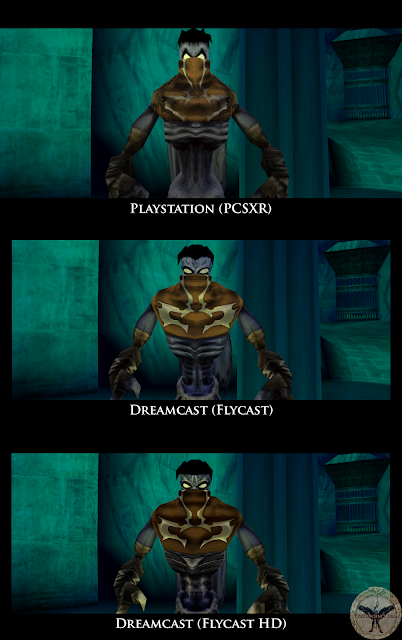 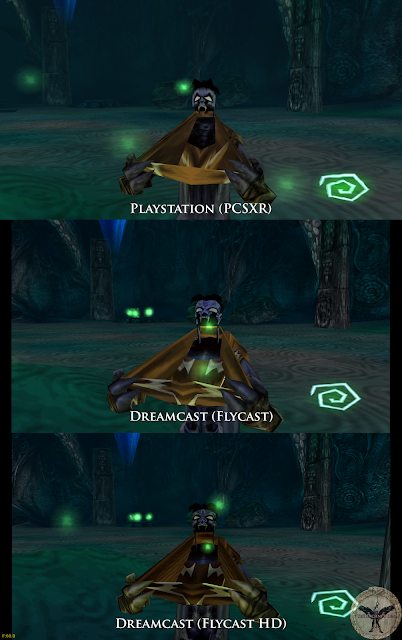 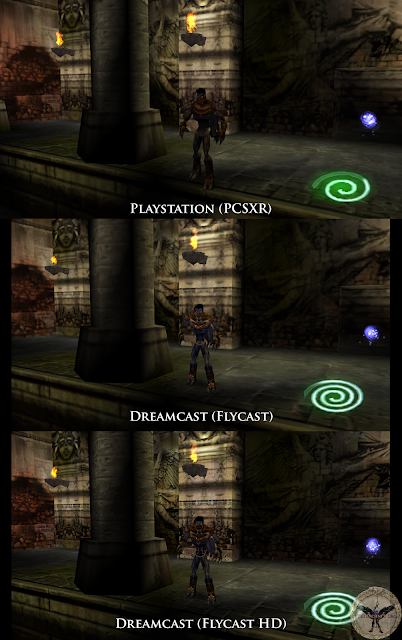 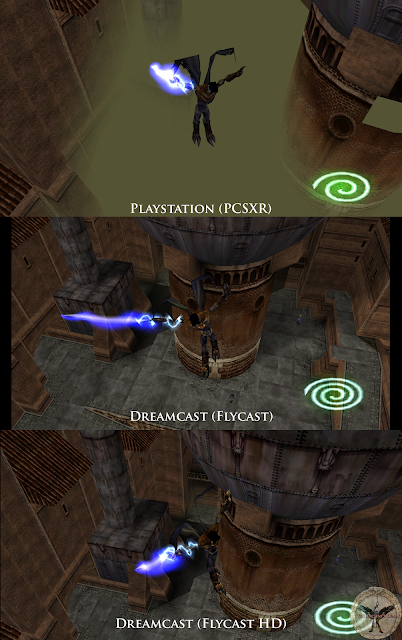 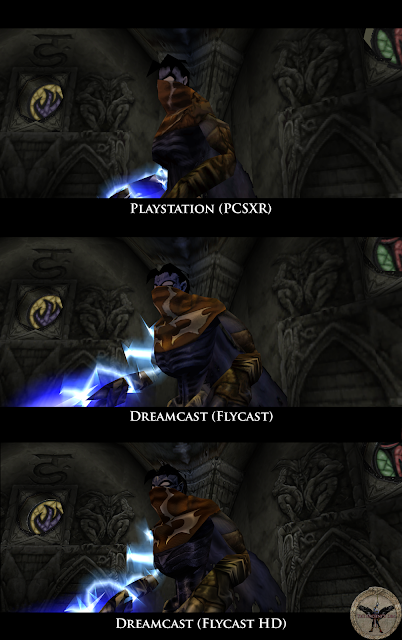 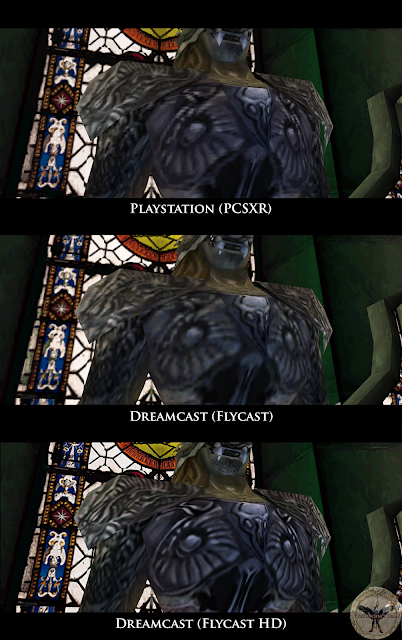 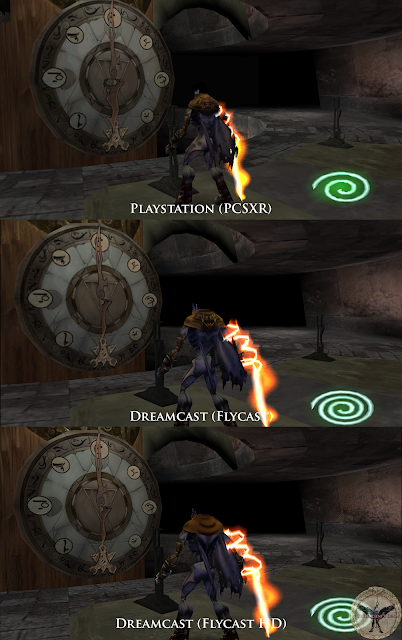