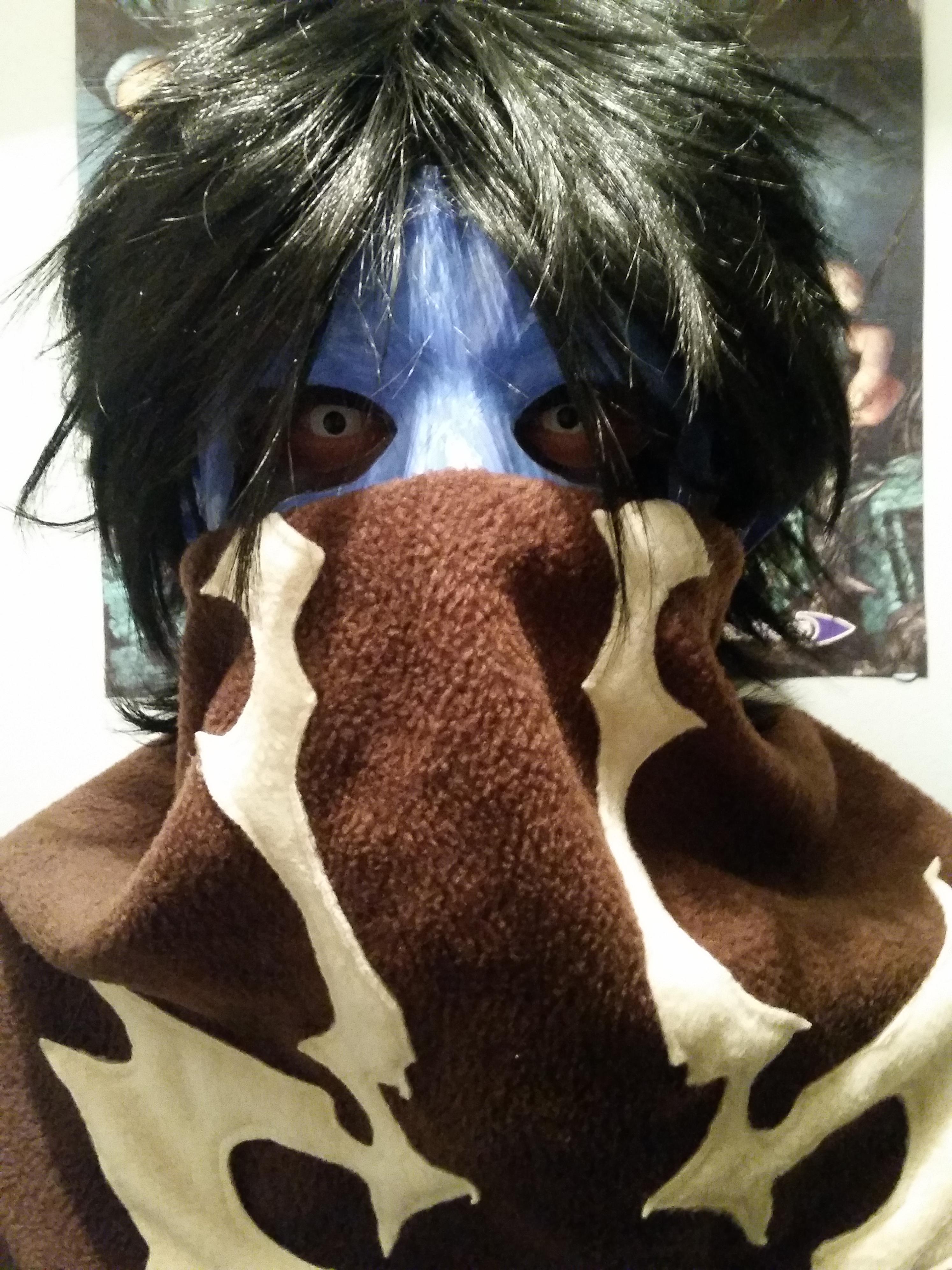 As it just turned 20th anniversary of Blood Omen and 15th of Soul Reaver 2, I wanted to do something special. This October´s London Comic Con provided a good opportunity to do so and was my first where I have actually participated as a cosplayer. The choice what to cosplay was pretty obvious right from the start to me - what better choice than my favourite wraith himself?

My first obstacle was how to recreate muscle like tissue on top of my own body. I have seen other cosplayers do protruding muscle suits, but I have felt this would be too difficult to achieve in my first cosplay idea, so I had to find a work around. Looking around on ebay, I have discovered that there is a tank top and leggings with a muscle structure already imprinted. The issue was that they did not come in blue and painting spandex is not really possible either. However, I put a transparent blue stockings and top to make it appear blue/purple. The wings themselves were not as difficult, but it took some time to discover which kind of material would do best for them and how big should they actually be (I had to cut out like 5 pairs in the end until I was finally happy with the result). 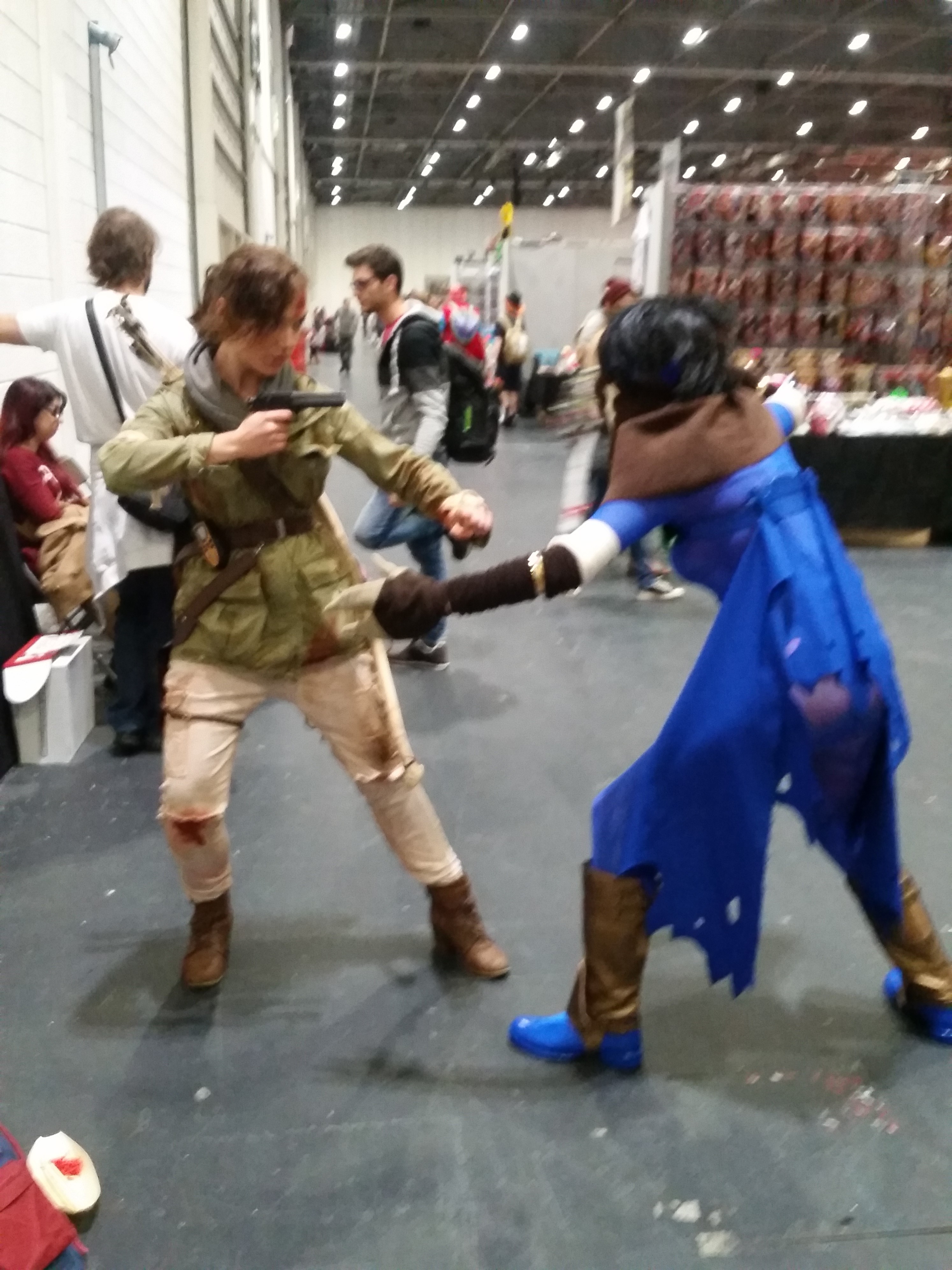 After I had the wings done, I had to figure out how to attach them to my back without attaching them to the net top. I have decided to try and use a coat hanger held onto a belt on my chest, which turned out to work well and kept the wings posable and easily removable. For the hands I had to order custom tri-fingered gloves. I covered my arms with two wristwarmers on each side to form a string of brown bandages and for the upper part I have cut up a tube bandage into two pieces and just tied it around my arm. I´ve put the golden armbands on top the wristwarmers.

The boots were one of the bigger challenges that I had to rely solely on myself, so I have purchased cheap used boots which suited the style. The huge issue was how to create the protruding exposed double toes, which are so specific about Raziel. I have thought about it and to make the boots durable and not awkward when walking, decided to just paint a dividing line between the toes, rather than attaching something which can easily fall off. I think it came out alright in the end. Since the original boots were pure black, I purchased Angelus leather colours and applied three coats of bronze paint. The bottom part I have painted blue to indicate those are Raziel´s feet and used a lighter blue to draw the muscle going in between the toes. After the paint was sealed in, there was still a missing piece. The plates which are at the front of the boots, right above the toes, had to be cut out of the raw leather and attached with glue. 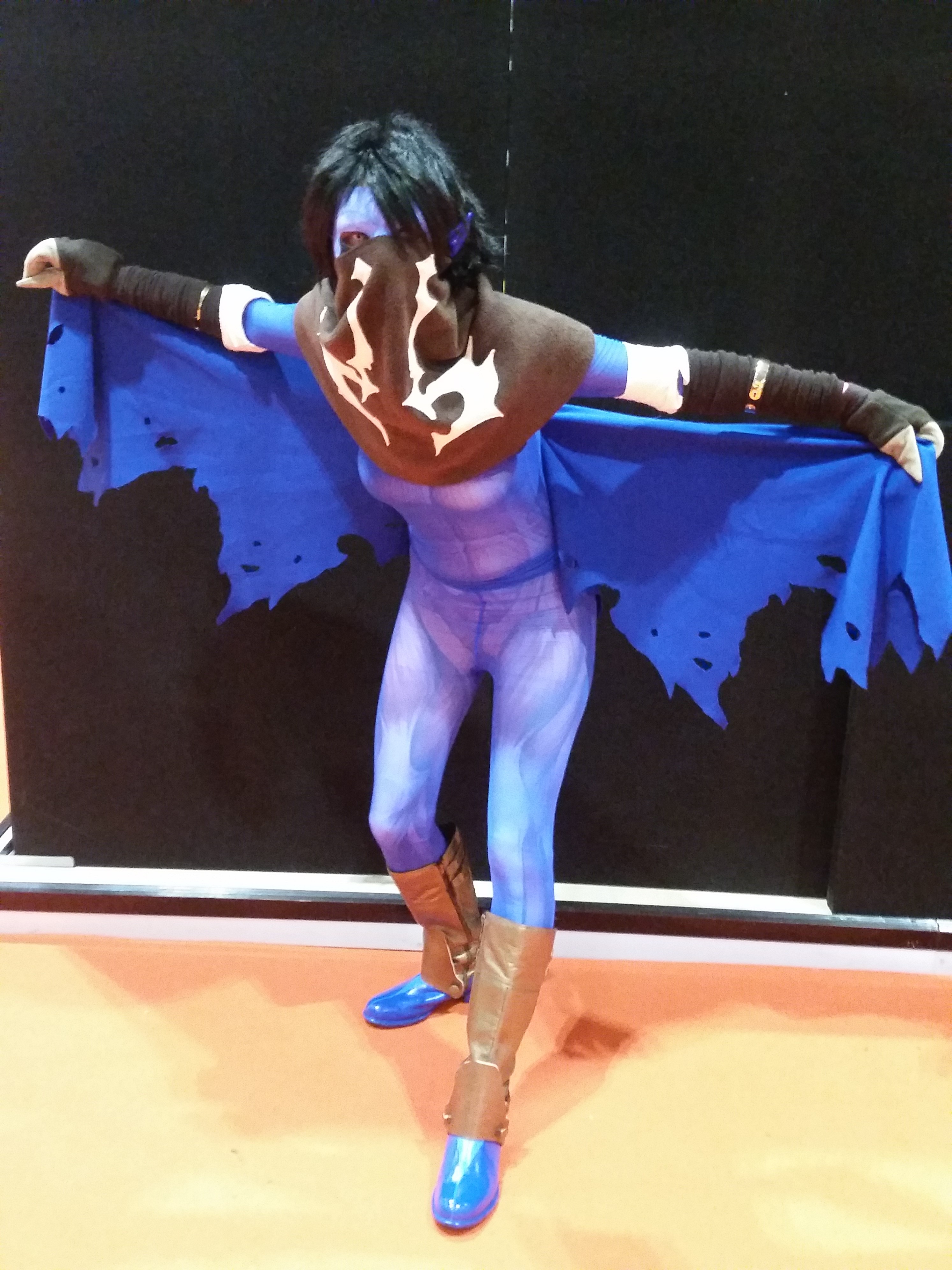 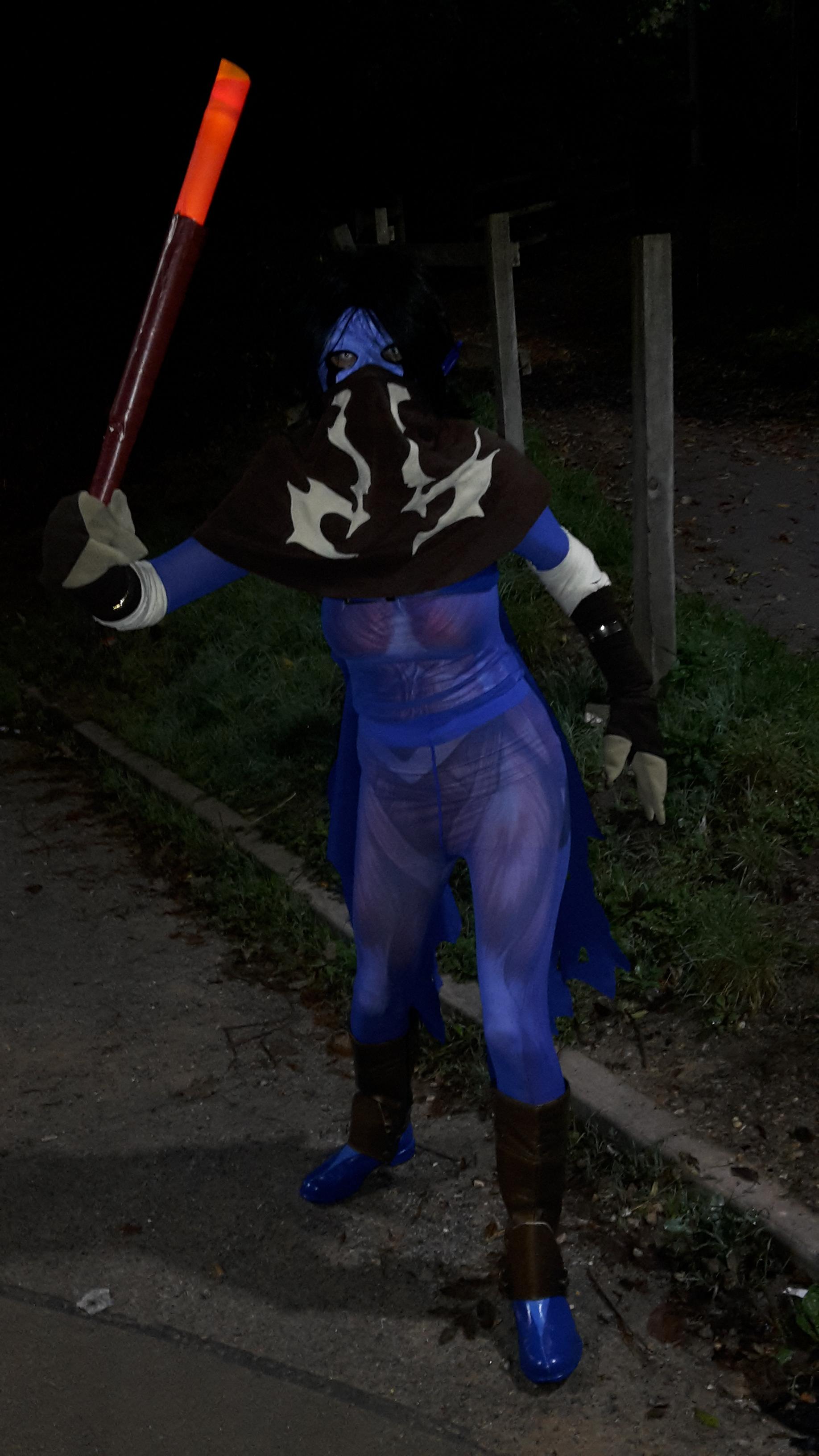 The cowl was a custom made item and was one of the most expensive items on the list. The craftsmanship of it and nice material make up for the price, though. The only problem which I faced on the convention and in general was, that while moving my head around, the cape would slide down, exposing my chin, so I have added a rubber band to the top circle of the cape so it will stay in place and I can freely move my head around.

The head itself was a challenge and I was contemplating using face paint or a mask, but a mask won because of how practical it was. I just bought a simple plain white mask,cut it up and painted it with acrylic colours. The colours were a bit damaged while I was wearing it, so a quick repaint and sealing the coat will do the trick. For the hair I purchased a black wig, which was quite cheap but fulfilled its purpose well. For the eyes I have ordered zombie eye pre-scription contacts, so I could walk around and still see sharply (I´m shortsighted). It was quite difficult to put them in at first (still takes me several tries to insert them in and out) but I got used to them. After I got home from Comic Con, I have discovered I had a balaclava, which would have been great to cover up my lower jaw, so I´ve used that for the newer shots. For the ears I have bought two pairs, one full on ears and the second pair just stick ons. Stick ons proved more practical in the end (just cut out ear slots in the balaclava so my ears can poke out and stick on blue ears can be attached).

Overal, making this cosplay was a lot of fun but even more fun was posing for people and walking around acting as Raziel, trying to do my best impression of his walking, gliding, fighting, etc (did a little "glide" down the stairs with my wings up at the end on my way to the cloak room). Looking around and breathing was a bit difficult but I knew cosplaying comes at a cost of some discomfort. Totally worth it and thanks goes to all the fans who took a picture of me and appreciated my cosplay, you made me really happy! I´ll definitely attend another comic con next year. 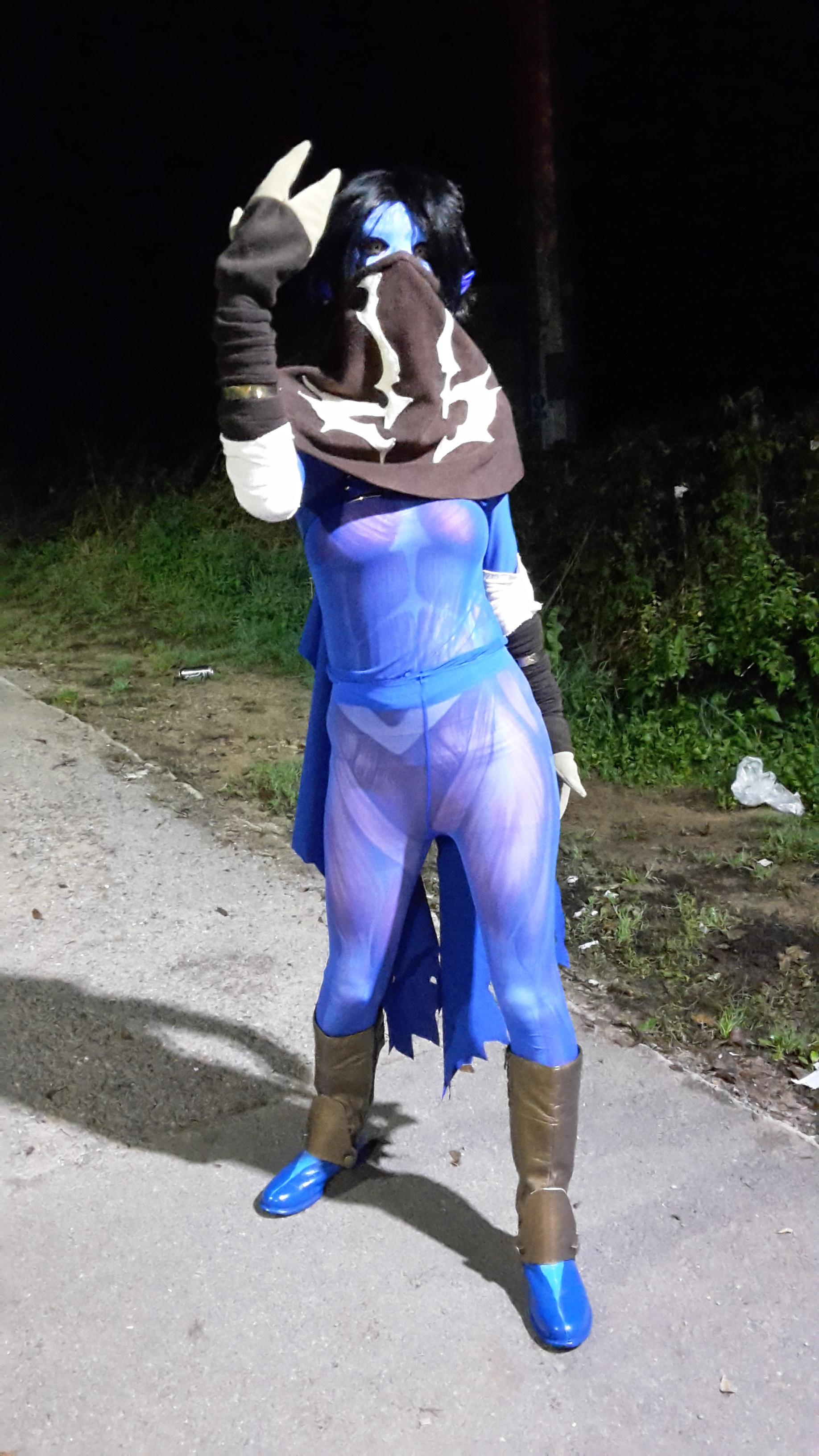