Celtic warrior Senua is embarking on a treacherous path to save her beloved from death. Accompany her on this journey to find Senua's true self!

Do you go through this as well? After finishing a game you feel empty. You want more, but you know that repeated playthroughs will never be the same as the first time. I think I felt like this after finishing SOMA and more recently, Talos Principle. Both games make you think about things which you do not stop and ponder about on a daily basis. What is consciousness? In Hellblade, Ninja Theory got together with professionals and doctors to show us how mental health issues can affect an individual. The game offers a bleak, but interesting insight upon a psyche of a suffering person. 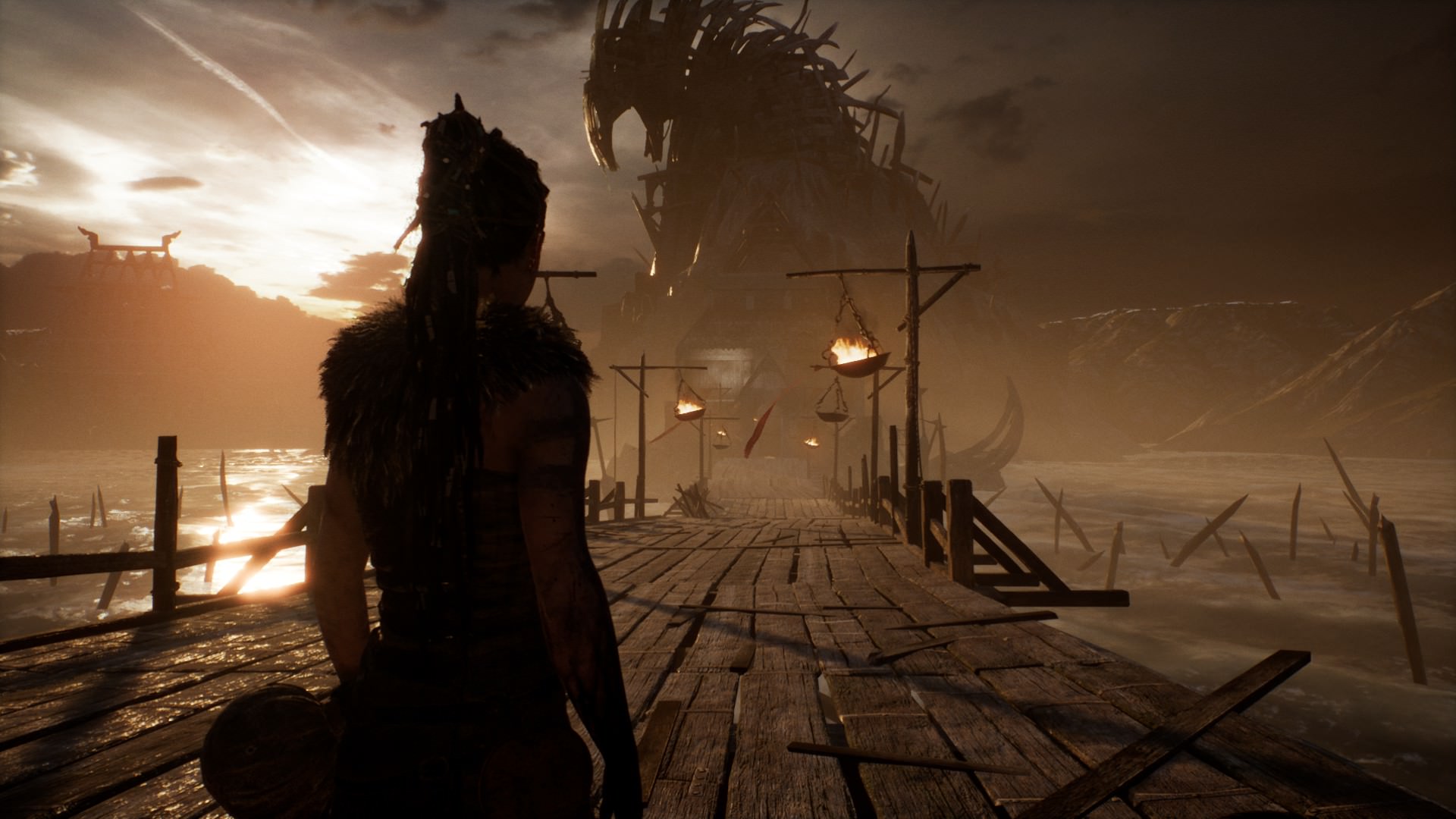 We learn who Senua is and where she comes from as the game goes on. At the beginning, we witness how she tries to reach Niflheim on her little raft, the land which is the entry to Helheim, her final destination. In Viking hell it is Hela, the ruler of death, who is the only one capable of returning a lost soul back from the Underworld. Getting to Helheim will not be easy. The bridge is guarded by a giant door with two large emblems and in order to unlock it, Senua needs to delve deep into the domains of Viking gods Surtr and Valravn. It is up to you which you go through first but both offer a very different experience. If you know about Surtr and what he is, you can already guess that this path will be like walking through inferno. He is the god of fire and Senua has to step a foot on the scorched ground, which still bears the screams of the people which burned to death there. To get through this fiery place, Senua must activate Surtr's signs scattered across the land. Touching one will materialize the moment when the fire consumed everything and you have a short time to get out of there and avoid choking to death. 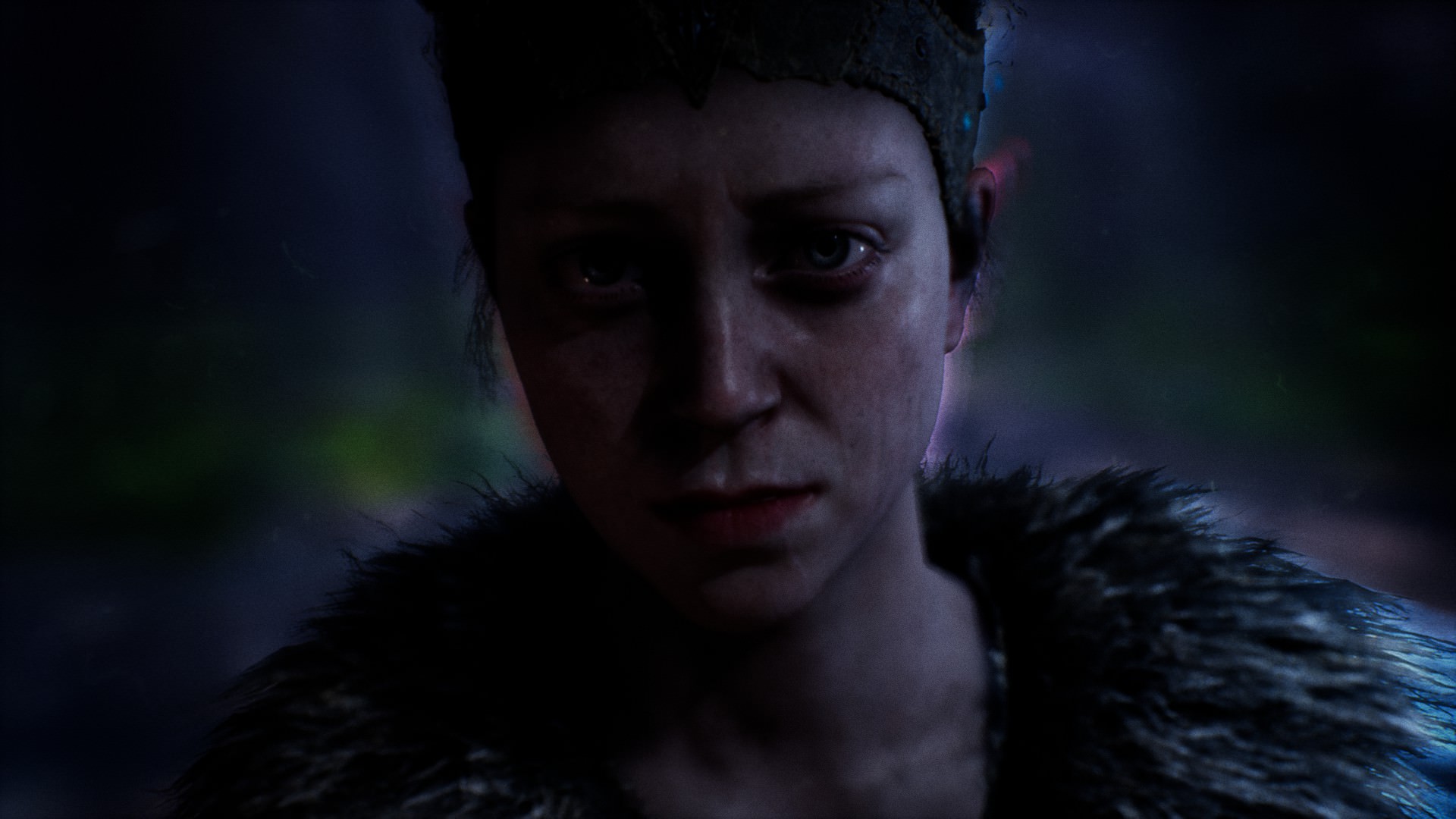 Luckily our heroine is not helpless, she is a skilled warrior after all and knows how to handle her sword. Later on, she will even master slowing down time as certain enemies can only be damaged in that state. You have one button for a light attack, second button for a heavy attack, one for dodging which is very important, and last one is for blocking. As I have been playing the Devil May Cry series for several years, this felt a bit too simplified to me and while you can lock onto enemies, you cannot really chain combos too much. The battles do not happen often and are usually spaced in between puzzle sequences. On higher difficulties the enemies get a lot tougher and dodging is something you have to master. I definitely recommend a gamepad, though, a keyboard might not be too comfortable.

Second boss is Valravn, the master of illusions and will drag you through a dark forest, where nothing is as it seems. If you ever get stuck, know, that looking at things from a different angle can help a lot. The way forward is blocked by raven insignias and to do that, you have to align the correct three symbols. If you persevere and kill Valravn, the way to the bridge will be open. It is not, however, the end of your journey, but merely a beginning to understand Senua's past. The game has some interesting mechanics up its sleeve but you have to discover that on your own. 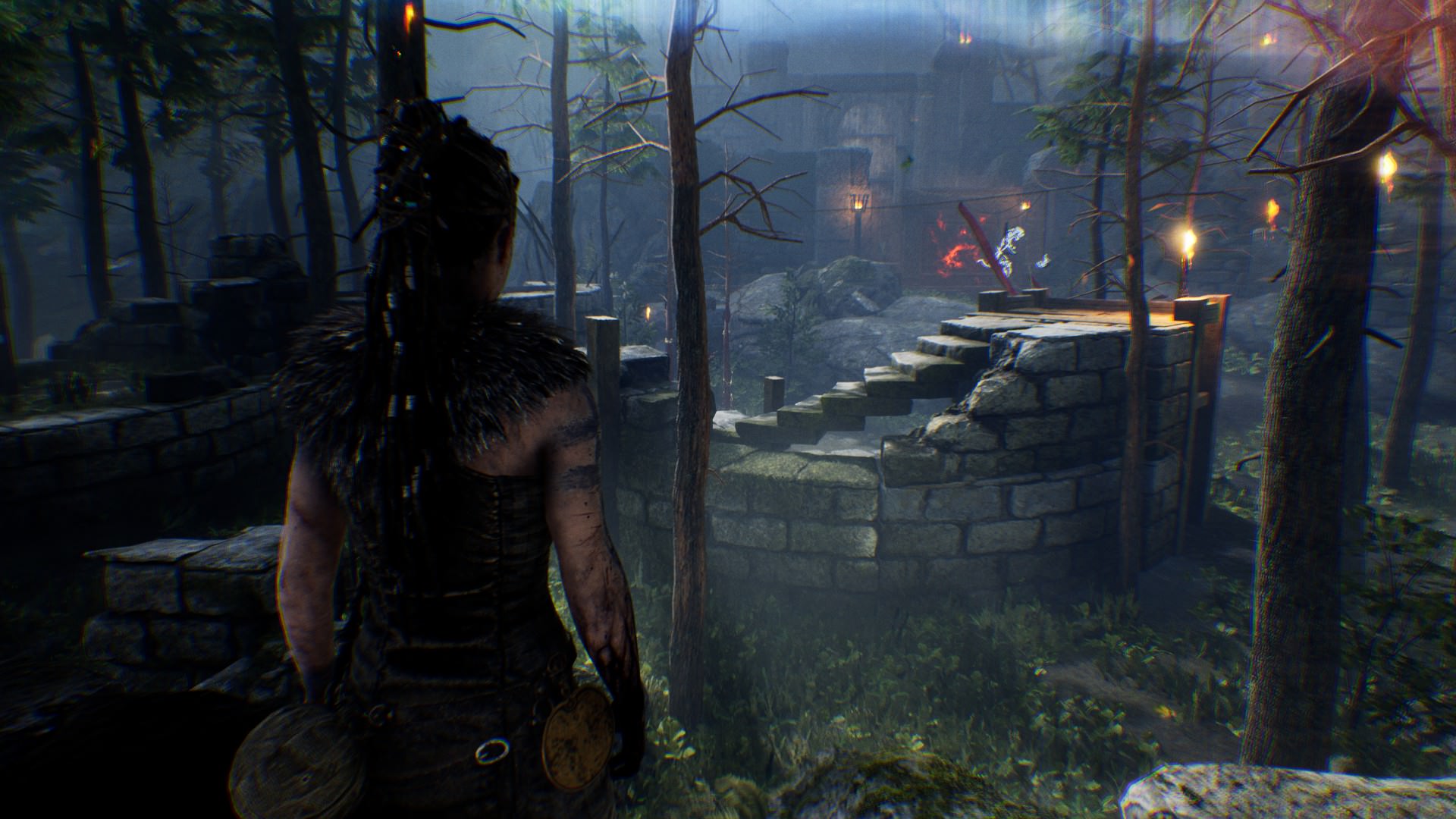 All of this is merely a vehicle to express Senua's true feelings. Those, who are going or went through something similar, will understand. It is best to describe as being lost in hopelessness and fear, to know nothing will make you happy. Just like Senua, who lost everything. You will just know that something went horribly wrong in her past, something she chose to block out. Something which will never fully heal and caused other personalities emerge in her mind. She is not alone on her journey – there are others, voices of encouragement, cowardice and fear, but also of bravery. They are always present, just like the darkness which sleeps within our heroine. You will hear their whispers, quiet or loud. If you are unsure on where to go, some will mock you. Others will doubt your abilities. It is something I had not experienced it before in a game and it hard to explain and better to hear on your own. Besides your own voices in your head there are also other characters, which emerge over time. Druth is a mysterious ally, whose purpose is to guide you. His stories tell you more about the Viking gods and their customs. Throughout the game you'll also find rune stones and if you find them all, you´ll receive an extra scene at the end. Senua is not by any means ordinary and sees symbols and faces everywhere, where normal people see mundane objects. Sometimes it´s just a play of shadow and fire, but it's enough for the symbol to appear. The search gets progressively harder, but there are indicators on the screen if you are close enough to one. 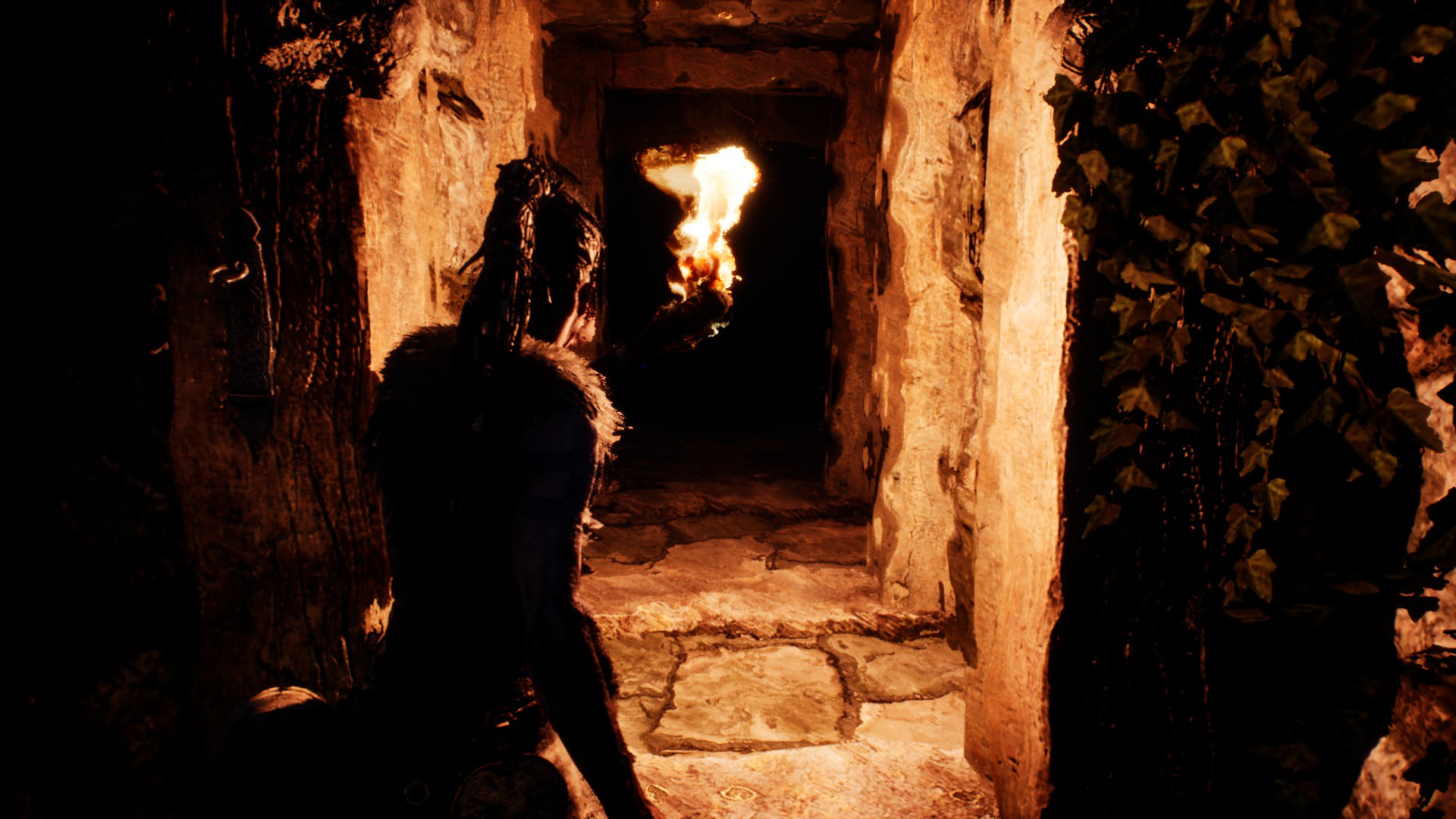 The graphics are beautiful and the game supports 4K resolution as well, if you have a good enough pc to run it. The sunset views above the bridge leading to Helheim, the fiery paths of Surtr, or storms in the dark forest are just a few environments which you will keep pressing F12. Senua's own character model has been made with the slightest details and sometimes it is hard to believe, she is not real. I must applaud the developers here, because it gives Senua more credibility and she also has a natural face mimicry. How she looks at you, the player, feels unique, like you are there with her all along. It is hard to not feel the oppressive uneasiness together with her. That is the price which is worth to pay because Hellblade is an experience which no other game can give you. 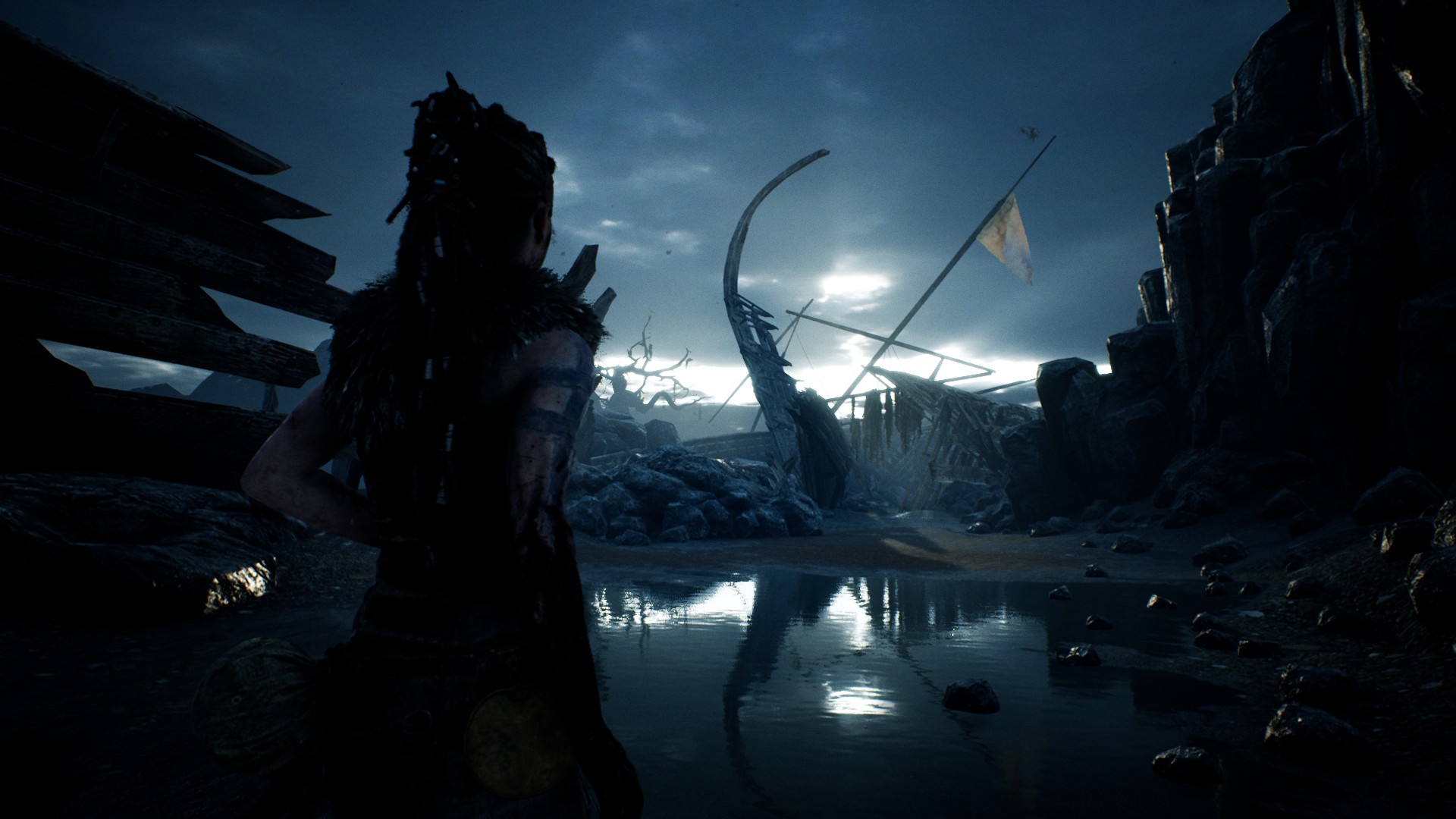 The sound engineering is done exceptionally well and it is recommended to play only with your headphones on, otherwise you might miss a lot. The voices, which haunt Senua throughout the game, have various volume and are important part of the game. The voice acting is professional and particularly Senua's voice actor sounds impactful (she received an award for it) and she did a great job on portraying Senua's pain. She definitely belongs to one of the best video game characters introduced to us in 2017. The music is more atmospheric and changes dynamically, depending what is happening on the screen. It will reside in the background when solving puzzles, other times it rumbles when you are slicing through your enemies. Sometimes even you are not sure if the developers are just playing you, or there are legitimate reasons to be alarmed. The biggest minus is that some mechanics are being repeated maybe too often (especially the puzzles which consist of lining up the symbols) and the fights can get a bit taxing over time. However, as the game is only about 8-9 hours long, which passes quite fast, these faults do not interfere too much.

You should know the least before playing this game. Do not watch the videos, maybe look at a few screenshots. Play this with your headphones on and best at night. Leave yourself to be dragged into the dark world and engulf yourself into darkness together with Senua and her alter egos. Stand against her worst nightmares and grab your sword tightly into your hands. Only by witnessing the truth you can overcome the hardship which awaits you. There is no way back, the raft is gone and the world of unknown stands before you.