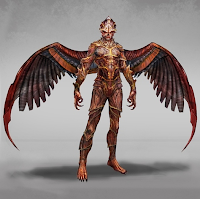 New blog posts regarding Razielim have unearthed their fate after Raziel´s execution into the Abyss. With Kain gone, the Lieutenants assaulted the remaining Razielim. However around hundred of them were spared, as they were pupating in the Underground city. Once emerged in their new state of change, they found themselves trapped underground. Starved for blood and with no knowledge of their sire´s apparent death, they became desparate and try to claw their way out. However, their beautiful forms suffered when they could not feed on blood and their skin hardened. Once they found their way out, they ventured through Coorhagen and flew to reach their clan territory in the West only to find Dumah.

On another note, Razielim won the poll regarding a favourite class in Nosgoth:

Email ThisBlogThis!Share to TwitterShare to FacebookShare to Pinterest
Označenia: Razielim